It's time to introduce two little monsters that takes up a lot of space in my heart and.. well, time. Two little girls who are spoiled beyond belief, but makes my heart melt everytime they look at me with their "Why aren't you sharing whatever you are eating with meeeee"-eyes.
They might not be the most clever duo in the world, but they always run to the cage door when they hear me coming home. They are crazy social, they never bite, instead your hand gets attacked by smooches. It doesn't matter if you're a stranger, they love you anyway.
Here they are, ladies and gentlemen: 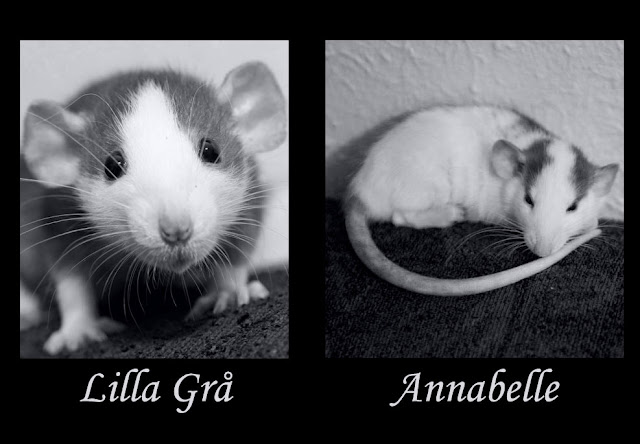 Lilla Grå (Little grey)and Annabelle caught my heart right away, one sleeping in the foodbowl making it impossible for her siblings to eat and the other one running straight up to me when I leaned down to look into their cage at the store.
It is actually impossible not to love my monsters. When I visit my mom, who is incredibly scared of my ratsies, even she can't resist the urge to sneak them some yummy apple-pieces or cookie-crumbs. She denies it, but for some reason my rats always go back home with me a little chubbier than when we left.

But no one is perfect. Lilla Grå hates sharing food with her sister and Annabelle is probably the only rat in the world with claustrophobia. The cause is probably something that happened about 2 months after I got them:
I had these colorful pipes for the rats to run around in, which had worked great when they were tiny, but rats grow fast (apparently to fast for themselves to realize) and one day I found Annabelle in the middle of a pipe - completely stuck. I had to take it all apart completely and kind of wiggle her out of there, which took almost an hour. Poor thing.

Anyway, they are my babies that I can't imagine ever having lived without. Do you have an animal that means the world to you?