Last year I made a santa hat for Mr. Kilt, today I decided to make another one. I also decided that it could be my very first tutorial.
Now I'm what I call a tutorial-retard, unless something is spelled out and showed veeery clearly, I don't get it. It's my kryptonite. So despite the long tutorial, it's really quick to make (An hour tops, even for the biggest N00b). I'm just very thorough...
So here it is folks, a must have for christmas; The Santa Hat - The Idiot-Proof Edition.
Remember: All the pictures can be clicked to be seen a lot bigger! 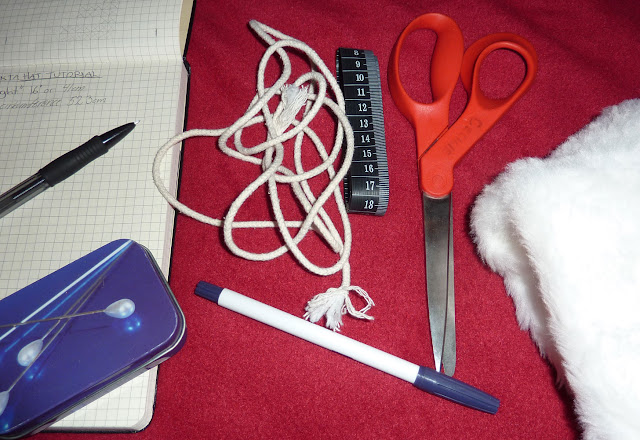 The stuff you need.
These are the things I use to make a santa hat, easy peasy.
Measuring tape(to measure stuff), scissor (to cut stuff), needles (to pin stuff together), notebook with pen (to "remember" the measurements),  magic fabric pen (Or anything else that doesn't leave permanent marks on the fabric)), a piece of string (to tie around the pen, it'll make sense, I promise) and last but not least the fabrics. I decided on red fleece and white fluff this year, but you can use basically whatever. 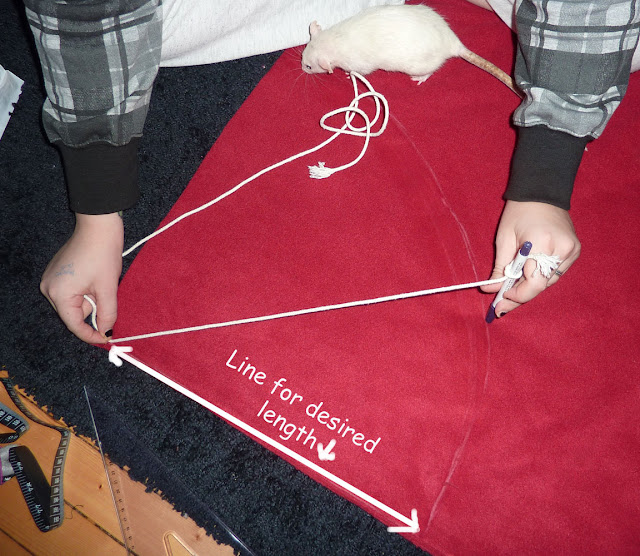 You start with deciding your "length" of the hat, I made mine 41 cm, which is a good basic size. Then you draw up a straight line of that length from the corner, along the edge of your fabric, but Not Right At The Edge,you need a seam allowance, so draw up the line about 0.5  -1.0 cm from the edge, if you're a worry-person, I suggest the 1 cm choice, since it leaves more room for mistakes. (I'm really good at those myself).
Do you have a nice pretty line now? Good.
Tie the string around your pen, hold the other end of the string with your thumb at the corner, right where your line starts. Have the pen standing straight at the end of the line and make sure the string is tight between them.
Now, Draw a Bow with the pen and keep holding the other end stuck to the corner. Draw all the way to the edge of the fabric. Now we have drawn up a pretty corner cone. Woo.
Now you need to measure the circumference of the soon-to-be-hatowner's head 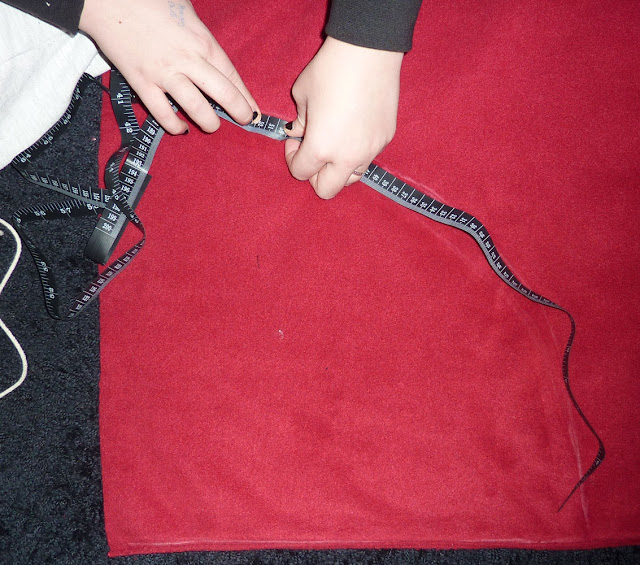 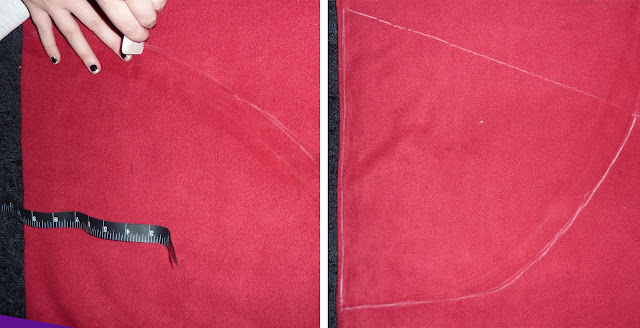 Since i trust you to have the head measurement, you now use your measuring tape to measure up that length along the curved line, starting at the Straight Edge-line. When you reach the correct length, you mark it and draw a straight line from that mark to the corner.


Now that we have it drawn up all nice, we need to mark the seam-allowance. Or.. Well, you don't Have to, if you like to go crazy with scissors while wearing a blindfold, there's nothing I can do to stop you. But let's say you want to get it right the first time around and is totally into seam-allowances.
Draw  small lines 1 cm outside of your lines, all the way around (This is where Lilla Grå came by to ask if I wanted any help). 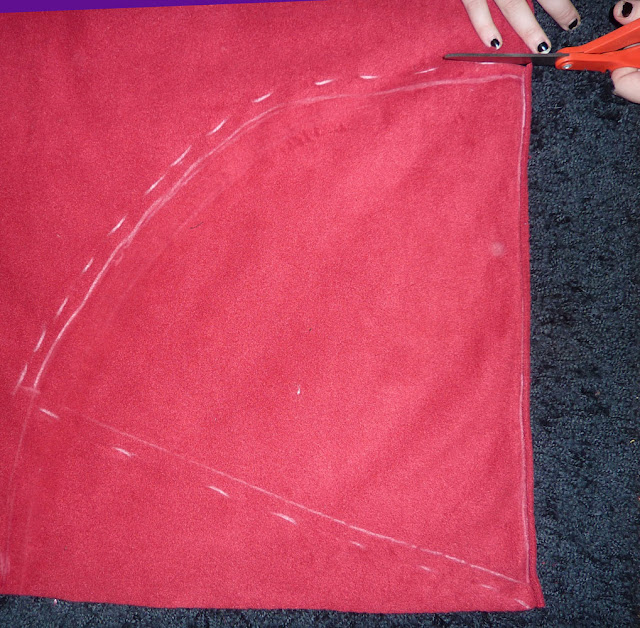 When your pretty artistic line-skillz look like this, it's time to start cutting it out. Make sure you cut along the dotted lines and not the main ones, it would suck if you had to start all over now, wouldn't it?


Now on to the brim, the fluff, the cozy part which will caress your forehead. Yes, that part.
First, you decided how wide you want it, I wanted mine to be 3 cm, then I gave myself an extra 1 cm for seam allowance, measured it up on the end of the fabric and folded it 4 cm from the edge (3+1. Logic is awesome). Then I measured up the length (Hint: It's the same as your head circumference), added 2 cm (one for each end) and with the fabric folded I cut right above the folded edge (see picture) and down where I had marked the width end. 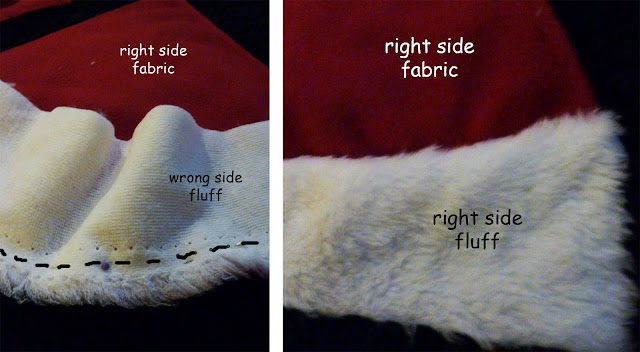 The Putting Together.
Now we have the fluffy hem and the red cone thingy, so it's time to needle them together. To make it extra obvious I've written on the pictures itself in case you get confused by my weird way of explaining. See the black line markings ? That's where you're going to sew, to attach the red and fluffy together. You do this by laying the Red down with the right side up, then you put the Fluff on top of it, wrong side up. Needle the edges together, the marking lines you made earlier on the Red will help you know where to sew.
By doing this the stitches won't show on the front, because when you fold the Fluff after sewing it it covers the stitches (see right picture). 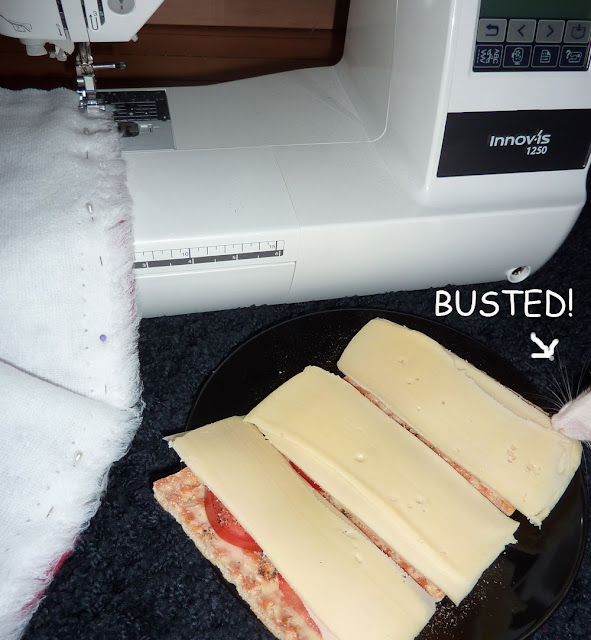 The Snack Break.
This is a great time to have a quick snack, while considering world peace or which five things you would bring to a deserted Island.
I decided that a picture of my fantastic lunch was in order, while forgetting that Lilla Grå was loose in the livingroom. The same moment I pressed the trigger a sneaky little rat ran as fast as her legs could carry her to steal a bit of cheese. I didn't even realize I had caught it on picture until I went through them all for the tutorial, so I figured it definitely deserved some blog space. 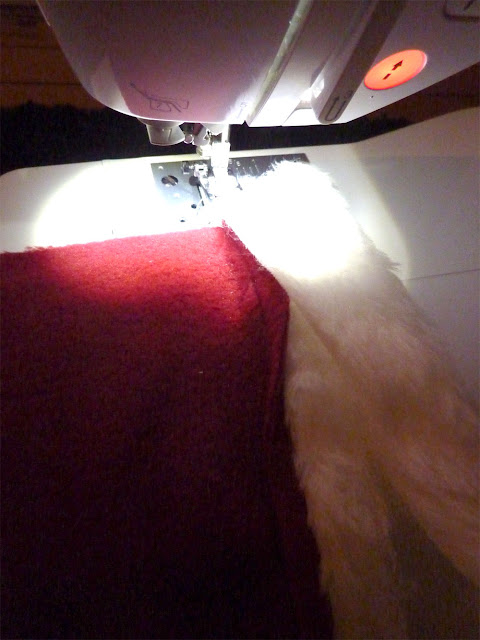 Now we need to stitch the fluff to the inside.
This is super easy, seeing how no one will see that side, you don't have to make the edge pretty at all. Just put the edge so it just covers the stitch marks from the front and sew along it. Using thread the same colour as your fluff is the absolute best now, since when this stitch is done you will definitely have stitched stuck some fluff. Carefully pull the "hairs" that are stuck and re-poof the fluff, making it basically impossible for anyone to even see any stitches. 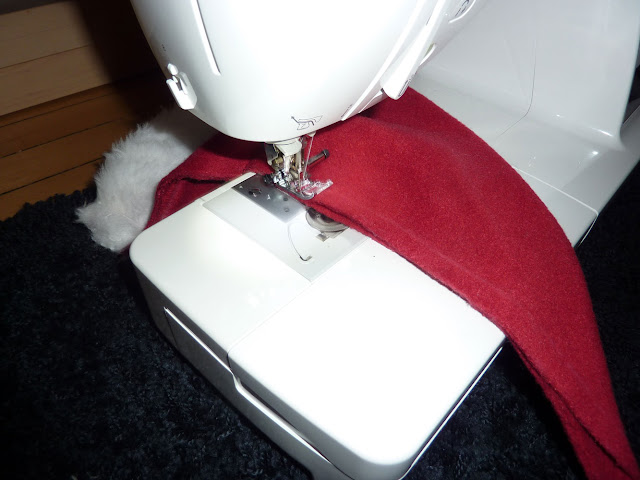 Closing the hat.
It's finally time to close it and turn it into an actual hat!  Find your "wrong side" (remember the white fluff was "quick stitched" on the wrong side) line your ends together and sew along your lines, finishing the point of "The Cone".
Almost done now! 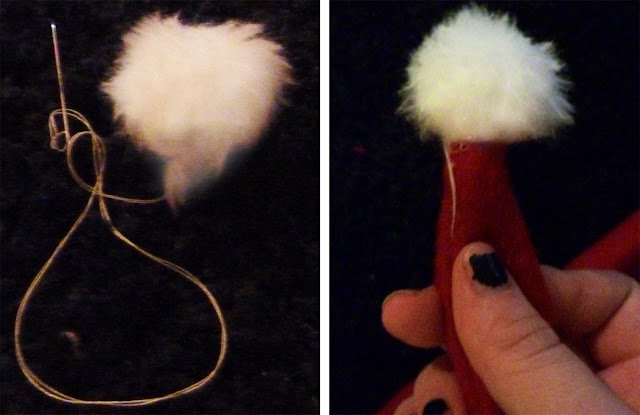 The Poofy End.
No santa-hat is complete without the poofy tip, right?  This you can make in so many ways. You can make it with white yarn, make a cotton ball or, like me, fold some fluffy scraps into a ball, hand-sew some stitches to keep it that way and then add a few more to attach it to the tip of the hat.
And with this done, my friends.... 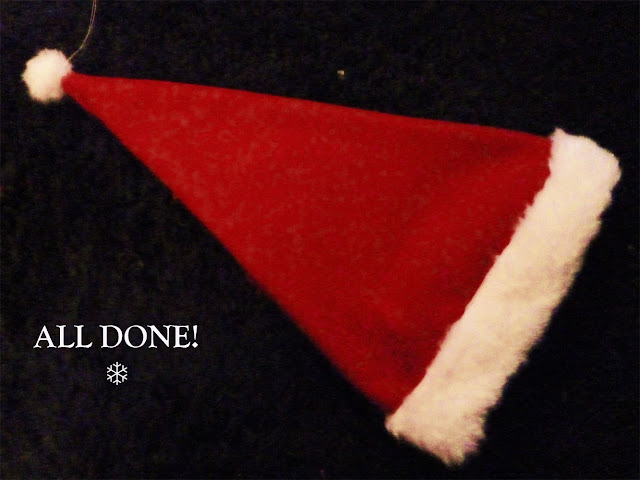 ... We are finally Done.
If you have any questions, don't hesitate to ask. Comments would make me super-duper-mega-happy as well!
Don't run with scissors.
Love,
~Katt
Author: ThatDamnCat at 00:48