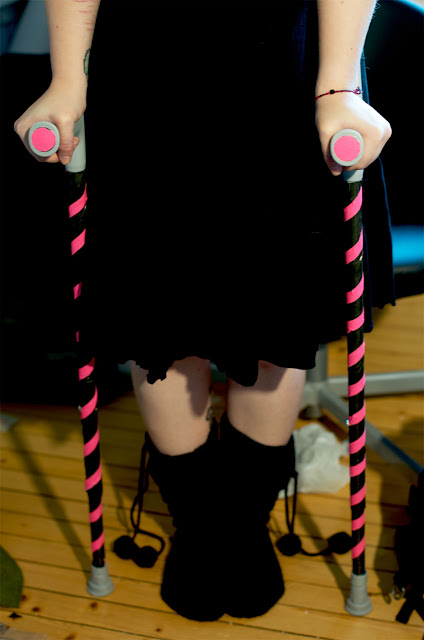 So, yeah, Murphy struck again.
In july (over three months ago, I know) the kids asked me to jump on the trampoline with them. So I did. And then I heard a *Click* and three seconds later I could barely support myself on my left knee.
Of course I didn't let that stop me.

Now fast forward three months and my knee still hurt like a bitch. Being the I-don't-need-a-doctor-I'm-sure-it's-nothing-serious kind of person that I am, I still hadn't had it checked out. Instead I'd been walking on it a lot, climbing mountains, trees and crawled on all fours under a bridge - over ten meters above ground. (Link will take you to my geocaching-blog where there's pictures of said event. Totally worth it, btw).

But yeah, my knee won the fight and I dragged myself to the docs. They pulled, poked and did a simple x-ray. Found nothing and said it was probably nothing cause it wasn't swollen. Of course it wasn't swollen Now, you should have seen it three months ago!
They sent me away to do an MR and I can now say that those MR-machines scare the fucking bejeezus out of me.

But at least they found out what was wrong (ligament partly torn off, but will heal on it's own).
So now I'm forced to use crutches and let the damn thing rest until it's healed.

I hate crutches, they're ugly, boring and always in the way. But doctor's orders are still orders and I decided to do the best out of the situation:
I pimped out my crutches with black and pink duct-tape.
Now I don't mind them as much anymore and just looking at them make me feel a whole lot better.